Note: The original HTML API was no longer functional and used WearML scripts to process tags and information within an HTML page. This HTML implementation is intended to emulate the native Android WearML support.

HTML web developers can use the HTML attributes placeholder and title for input HTML tags to create voice commands and inject RealWear directives, such as numbers or words over buttons, overlays, etc. This allows web applications to be fully utilized by your RealWear device.

Two obstacles were identified in the process:

The goal was to utilize existing design patterns in both HTML and native Android to improve our customers experience when developing HTML applications for RealWear devices.

If a clickable item has the HTML placeholder attribute, your RealWear device will convert the placeholder text into a voice command if hf_use_description is used.

When a user says, “ENTER NAME” or “SELECT ITEM 1”, the RealWear device selects the text input field and opens the voice keyboard.

If the HTML developer includes a directive like hf_show_text to show voice commands over the clickable item, or hf_persist to keep voice commands visible, the developer would include the directive they want in the HTML title attribute and separate each directive with the pipe (“|”). The directives are shown on line 7 in the following image.

Note: If you do not want to display a number bubble, add hf_no_number separated by a “|” (pipe) to line 7. Additionally, remove hf_show_text from line 7 to remove the display text. This allows the placeholder text to display the voice command only. 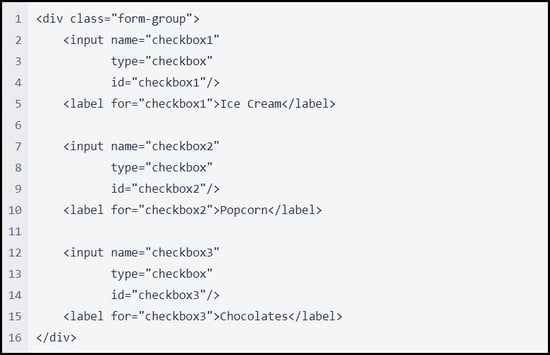 The checkbox element is focused when the command is given but not clicked. HTML developers can add the hf_make_clickable directive to correct this behavior. This directive, combined with other directives shown in the following image, gives HTML developers more control over the UI appearance. Each checkbox uses slightly different directives from the API to give a specific output. 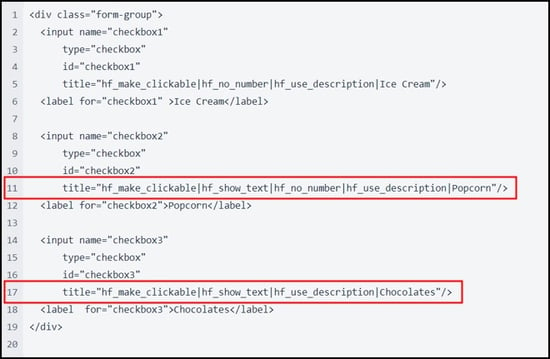 In the image below, the three checkboxes are described as follows:

All HTML elements can be given commands, but some tags lose the assigned voice command after a single use. This usually happens when the element is not an intractable UI element, like div tags.

If this happens with an element you are working with, add a tabindex attribute to the tag next to the title attribute. This forces the RealWear speech service to respect the voice command assigned, as seen with buttons and other clickable elements.

A tabindex attribute is also useful if you want to add hf_no_number on the root element to remove all number indexes from the page.

This can be done with the following example:

If you want to add a simple selection to any tag without voice commands, add an empty onclick=”” attribute and the element will get a number index for selection.

Note: If you already have an onclick attribute and want to remove the number selection bubble, use the hf_no_number directive.